Need Help Growing Cranberries? It May Be Crawling in the Soil 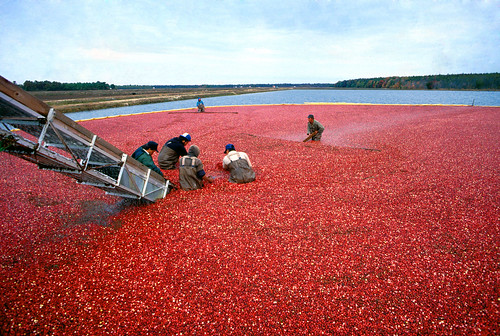 Wisconsin produces 60 percent of the nation’s cranberries. They also are grown in the states of Massachusetts, New Jersey, Oregon and Washington. (USDA-ARS photo by Keith Weller)

The cranberries that are traditionally a part of Thanksgiving dinner may have a brighter future because of what Agricultural Research Service (ARS) scientists found when they went digging recently in a remote marsh in Wisconsin.

“We literally found biocontrol agents in our own backyards,” says Shawn Steffan, an entomologist with the ARS Vegetable Crops Research Unit in Madison.

The cranberry, just like any other plant, is attacked by insects that can damage its roots, vines, leaves and, in the case of the cranberry, the bright red berries that processors turn into jellies and juice. Cranberries are a $1 billion industry in Wisconsin. The state produces 60 percent of the nation’s supply, and the cranberry is the state’s official fruit.

There are several insects that can wreak havoc on cranberry bogs, with the flea beetle, the cranberry fruitworm and the sparganothis fruitworm (aka “Sparg”) chief among them. To control them, cranberry growers often have to spray their marshes with insecticide two or three times a year. The insecticides leave residues, and the treatments cost up to $100 per acre, which can add up. Many growers have several hundred acres of cranberries.

The pests spend much of their life cycle underground as larvae, and that prompted Steffan to wonder what natural enemies might also live down there that could be used to control them.

In the summers of 2015 and 2016, he and his colleagues went out to marshes in Wisconsin where wild cranberries have grown for millennia and found half a dozen nematode types that attack the pests in the wild. They compared the nematodes’ abilities at controlling the pests with insecticide sprays.

Overall, the results showed that two of the six nematodes were particularly effective, in some cases wiping out up to 90 percent of the pests. The beauty of using them as biocontrols is that they are native to Wisconsin, so they’re no threat to indigenous flora or fauna. “We don’t have to worry about the unintended consequences of introducing a foreign species into a new habitat,” Steffan says.

Steffan is currently working on a strategy for mass producing the nematodes and hopes to create a bio-insecticide that cranberry growers can use with standard spray equipment.

“It’s an environmentally friendly way to address a problem that now requires the spraying of insecticides,” he says.

In this season of giving thanks, it’s also another reason to give thanks to Mother Nature.

What a great discovery. I am a frustrated farmer and really love reading these articles. Thank you for sharing.