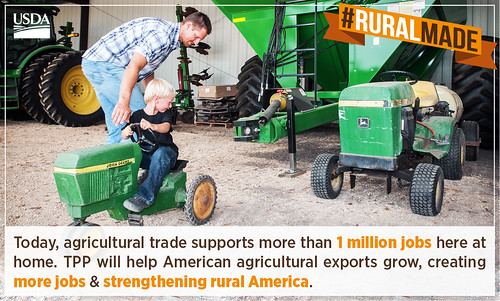 The Trans-Pacific Partnership (TPP), the largest multilateral trade agreement since NAFTA, will break down barriers to trade and create significant new opportunities for U.S. agriculture. The United States and 11 other Pacific Rim countries finalized the terms of the deal in October and it must now be ratified by all the TPP member countries. When it comes to TPP passage, all of us in American agriculture have a stake in the game. Here’s why:

Collaboration and Innovation are Keys to Organic Success

For years, the organic industry has experienced enormous growth, defying expectations and creating exciting opportunities for producers and entrepreneurs around the world. 2014 was another record year for the organic community, with 19,474 certified organic operations in the United States and nearly 28,000 certified organic operations from more than 120 countries around the globe.

The retail market for organic products is now valued at more than $39 billion in the U.S. and over $75 billion worldwide. With its rapidly growing market and high consumer interest, USDA is focused on helping this area of agriculture achieve even greater success. In May 2013, Agriculture Secretary Tom Vilsack issued guidance that identified organic priorities for the Department, including training and outreach, growing the organic sector, reducing paperwork, improving research, and gathering data.

Discovery Could Rekindle Interest in a USDA Trailblazer

This post is part of the Science Tuesday feature series on the USDA blog. Check back each week as we showcase stories and news from USDA’s rich science and research portfolio.

Bountiful harvests don’t magically appear on store shelves and supermarkets. USDA scientists strive to make sure that the variety of meats, fruits, vegetables and grains we enjoy are hardy enough to withstand insects, diseases, droughts and other natural threats familiar to anyone with a garden or farm.

David Fairchild, a USDA scientist, was a key part of that effort. Fairchild collected plants from all over the world so they could be studied and bred. He organized the USDA's Office of Foreign Seed and Plant Introduction and served as its chairman for more than 20 years. He is credited with introducing about 30,000 plant species and variations into the United States, and he was instrumental in establishing gardens throughout the United States to screen plants with potential for improving our diets, gardens and landscapes.

U.S. Beef Jerky is Back in Japan!

In January, the United States and Japan concluded nearly two years of negotiations to re-open the Japanese market to U.S. processed beef products. These efforts ensured that, for the first time since 2003, all products from U.S. cattle less than 30 months of age would be eligible for export to Japan. Japan is the United States’ largest beef export market, valued at nearly $1.6 billion in 2014.

In February, the FAS Office of Agricultural Affairs in Tokyo was understandably excited to learn that Perky Jerky, a Colorado-based company, was interested in bringing its beef jerky to FOODEX 2015, the largest food tradeshow in Asia drawing almost 3,000 exhibitors from 79 countries. The value of exhibiting at FOODEX is considerable, as over 75,000 trade professionals from Japan, North Asia, Southeast Asia, and around the world would attend the show. The only problem was that FOODEX was scheduled to begin in less than two weeks, and the beef jerky hadn’t even been produced yet. Bringing a new-to-market product to Japan in less than two weeks would be a daunting task under normal conditions, but late February was anything but normal as Japanese customs and quarantine officials were busy clearing an enormous volume of products for the nearly 2,300 other international exhibitors from 79 countries participating at FOODEX.

New Farmers and Ranchers: Ever Thought About Exporting?

The first step in running a successful farm or ranch business is identifying a product to create and connecting that product to potential customers.  For some new and beginning farmers, it can be a challenge to connect to the right market opportunities and to build a business that fits.

At USDA, we are working to make sure that there is access to markets at all levels - so that whether a new or beginning farmer wants to sell locally, regionally, nationally, or globally, they have access to tools that support their business and business development.

When consumers hear the term Kobe, the first thought that comes to mind is typically not a city in Japan, but rather a juicy steak right off the grill.  Kobe beef is globally renowned for its rich flavor, juiciness, and tenderness or high marbling content.  Kobe beef is cuts of beef from the Tajima strain of Wagyu cattle (which mean Japanese cattle), raised in Kobe, Japan.  But did you know you can find Kobe-style beef produced right here in the United States?

Since 1994, U.S. producers have worked to offer American Kobe-style beef that features the same characteristics, marbling and flavor that defines Japan’s Kobe beef by bringing herds of Kryoshi and Akaushi breeds of Wagyu cattle to the United States.  The same closed herd and multi-trait selection process used for Kobe beef was adopted and is now used by various U.S. trade associations (American Akaushi Association, the American Wagyu Association, and the Texas Wagyu Association) that promote and uphold the industry standards. Highly prized for their rich flavor, these cattle produce what some would argue is among the finest beef in the world.

Organic Trade in the Americas: Inter-American Commission for Organic Agriculture

The Global Exchange of Organic Products: Expanding Markets at Home and Abroad

Last week, we celebrated another victory for the global organic community – the announcement of an organic equivalency agreement between the U.S. and the Republic of Korea. We are thrilled with the outcome!

Beginning July 1, 2014, processed organic products certified in Korea or in the U.S. may be sold as organic in either country, eliminating significant barriers and creating opportunities for American businesses across the organic supply chain as well as setting the foundation for additional organic agricultural trade agreements. Consumers in Korea will now be able to enjoy a wide range of U.S. organic exports including condiments, cereal, baby food, frozen meals, milk, and other processed products.

While many tuned in to watch the World Cup to see which team would become the globe’s soccer champs, others watched a competition of a different kind: one that named the earth’s best identifiers of slices of earth.

“Soil and land judging at the high school and college level is a baseline entry for young people to study the land and learn to read the landscape so that they can better manage and protect it,” said Maxine Levin, with the National Soil Survey Center of USDA’s Natural Resources Conservation Service.  NRCS is the United States’ premier private lands conservation agency, originally founded to conserve and map the nation’s soils. Levin helped prepare the contest and served as a judge.

Two years ago this month, the United States and the European Union (EU) implemented an organic equivalence arrangement, meaning products that are certified as organic in the U.S. can also be sold as organic in the EU, and vice versa. This arrangement broke down many of the barriers that organic producers, especially small and medium-sized farmers, were facing in exporting their goods to one of their largest markets. It has also proved to be a good example of how we can recognize each others' systems and work together across borders to arrive at beneficial agreements.

The U.S. and EU have some of the strongest regulatory protections in the world, and the organic equivalence arrangement recognizes these standards and uses them for everyone’s benefit. Before the agreement, growers and companies wanting to trade products on both sides of the Atlantic had to obtain separate certifications to two different standards, which meant a double set of fees, inspections, and paperwork. Now, if a product is certified organic by one party, it can bear both the USDA organic seal and the EU organic logo, without going through that second certification process. This is possible because the EU and the U.S. have recognized that though our regulatory systems are different, they both produce high quality organic food and agricultural products under rigorous programs. Secretary Vilsack, while addressing the EU agricultural ministers earlier this week, had the same message of cooperation in regards to the Transatlantic Trade and Investment Partnership (T-TIP).